James Boswell, who wrote the famous biography of Dr. Johnson, recounts in his journal a conversation with a man who trusted nothing about history except the mere occurrence of such widely witnessed and notorious events as great battles.  Similar thoughts have probably occurred to anyone who has lived through historical events and was paying attention.  I have lived through several in my own lifetime that I interpret a great deal differently than the versions that appear in the standard histories.  In other cases there are profound differences of opinion among the writers of history themselves.  The most striking example in my own experience is the Blank Slate affair.  In my opinion it was the greatest scientific debacle ever, and yet little has been written about it.  The best known historical account is Steven Pinker’s The Blank Slate, a deeply flawed bowdlerization of reality.  There are many possible reasons for the lack of a reliable account of what happened.  Perhaps the academics one would normally consider most qualified to write on the subject are too ashamed to talk about it.  It was, after all, a remarkable failure of the “science” they represent, and which they loudly insist everyone else must trust and defer to.  An honest history must also reveal the role their “tribe” played in actively promoting and bitterly defending an absurd fantasy for a period of more than half a century.  Fortunately, a great deal of source material exists that isn’t quite in step with the “official” version of the affair, which tends to gloss over these inconvenient truths.

“Official” versions of the history of the Blank Slate, including Pinker’s, typically run more or less as follows:

No doubt this version of “history” is comforting to academic practitioners of the behavioral sciences.  It elevates one of their own, E. O. Wilson, into the role of the knight in shining armor who slew the Blank Slate dragon.  It includes a happy ending, in which science was recued and put back on track by the scientists themselves.  It is also complete nonsense.  Everything of any significance about human nature in the meager treatment it received in Sociobiology, which was devoted mainly to Wilson’s study of ants and other fauna, as well as in his On Human Nature, published three years later, is completely derivative from works that had appeared through the 1960’s.  They were written by the likes of Konrad Lorenz, Niko Tinbergen, Desmond Morris, Lionel Tiger, Hans Hass, and, most prominently of all, Robert Ardrey.  Their books were widely read and extremely influential.  As a result, by the end of the 60’s, the Blank Slate was a dead man walking.  By the beginning of the 1970’s the only question remaining was how long it would take the dead man to fall.  In fact, it was a slow tumble.  The grip of the Blank Slate in academia and much of the public media wasn’t finally broken until the turn of the century, and one still hears its death rattle occasionally even today.  However, there can be no real question about who was actually responsible for its demise.  The relevant historical source material is there in abundance for anyone who takes the trouble to look for it.

I’ve written about Pinker’s specious reasons for dismissing the earlier work of Lorenz and Ardrey in an earlier post.  There can be little doubt that he knew the truth, but simply chose to ignore it.  For example, he mentions reading Man and Aggression, a collection of Blank Slater essays edited by Ashley Montagu and aimed mostly at Ardrey and Lorenz.  Published in 1968, it is one of the more important pieces of historical source material on the subject.  One of the essayists Geoffrey Gorer, psychologist, former patron of George Orwell, and prominent public intellectual at the time, wrote as follows:

Almost without question, Robert Ardrey is today the most influential writer in English dealing with the innate or instinctive attributes of human nature, and the most skilled populariser of the findings of paleo-anthropologists, ethologists, and biological experimenters… He is a skilled writer, with a lively command of English prose, a pretty turn of wit, and a dramatist’s skill in exposition; he is also a good reporter, with the reporter’s eye for the significant detail, the striking visual impression. He has taken a look at nearly all the current work in Africa of paleo-anthropologists and ethologists; time and again, a couple of his paragraphs can make vivid a site, such as the Olduvai Gorge, which has been merely a name in a hundred articles.

…he does not distort his authorities beyond what is inevitable in any selection and condensation… even those familiar with most of the literature are likely to find descriptions of research they had hitherto ignored, particularly in The Territorial Imperative, with its bibliography of 245 items.

As noted above, there’s no need to take Gorer’s word for it.  The historical evidence is there.  Ardrey’s significance and the derivative nature of Wilson’s comments on human nature was certainly no secret to the rest of the Blank Slaters.  In their mobbing attack on Sociobiology in the New York Review of Books they wrote,

From Herbert Spencer, who coined the phrase “survival of the fittest,” to Konrad Lorenz, Robert Ardrey, and now E. O. Wilson, we have seen proclaimed the primacy of natural selection in determining most important characteristics of human behavior.

In fact, the lay public was far ahead of these “scientists.”  Ardrey’s work may not have seen the light of day in the academic journals, but it had been prominently featured throughout the 60’s and early 70’s in such popular magazines as Life and Time, in many of the more “high brow” venues, such as the Saturday Review, and even in the “respectable” articles that lent redeeming social value to Playboy and Penthouse.  By the time Sociobiology finally appeared, the Blank Slaters were largely engaged in a drawn out process of bamboozling themselves, with a predictable conclusion.

A typical example of these numerous “Ardrey tracks” appeared in the February 1972 issue of Encounter magazine.  Entitled “4-Dimensional Man,” it was concerned not with group selection, Pinker’s bogus excuse for dismissing the entire corpus of Ardrey’s work, not with “hydraulic theory,” which he used to drop Konrad Lorenz down the memory hole, but with the common theme of all Ardrey’s work; the reality of human nature.  The “4th dimension” Ardrey referred to was, of course, mankind’s evolutionary past.  As he put it,

For some decades now, certain areas of our most popular sciences have dedicated their efforts to the proposition that man is three-dimensional, owing nothing of his behavior, his thoughts, his actions to anything but present circumstances of his environment, as experienced within his lifetime.

Ardrey was hardly unaware of the tactics of bullying and vilification the Blank Slaters used to silence their enemies.  He had been one of their prominent targets long before Wilson was similarly “martyred.”  Noting the obsolescence of the term “instinct,” when applied to human beings and other higher animals he wrote,

Instinct – inherited behavioral patterns perfected in our evolutionary experience – enter as a factor in the human equation, or they do not.  The environmentalist insists they do not and (in the best tradition once suggested by Maslow) is not above reinforcing his arguments with the insinuation or direct observation that those who disagree with him are reactionaries, Social Darwinists, fascists, and probably racists to boot.

He continues with a pithy description of the Blank Slate orthodoxy:

The environmentalists have the advantage of widespread academic control, widespread influence over educated thought and organs of opinion, but the disadvantage of sometimes stunning displays of ignorance concerning new facts of biological life.

and notes that, by that time, they already had an intimation of their coming demise:

Something is panicking the three-dimensionals, and how well I know!  In their defenses against the intruder they resort too frequently to self-righteousness, to unprofessional misquotation, and (as I have earlier suggested) to the upside-down McCarthyism of charging right-wing political guilt.  I find it difficult to believe that I have dedicated the last fifteen years of a quite profitable writing career to the fascinations of evolution simply to prove somebody’s political leanings.

Things haven’t changed much, have they?  The same, hackneyed tactics still feature prominently in the arsenal of latter day “progressives.”  Today they serve mainly as an admission of intellectual sterility.  Ardrey’s article ends on a prophetic note:

The controversy will not end for a long, long while.  But the fatal pessimism of the environmentalist rests without doubt on the failure of changes in environment to alter significantly the nature of man.  And the optimism of the evolutionists rests on man the inheritor, the four-dimensional animal.

Ardrey was not optimistic because he believed in a changeless status quo enforced by rigid human instincts.  Rather, he hoped that by “comprehending ourselves” we would enable “new illuminations of human complexities and civilization’s paradoxes,” adding that no such human progress would be possible,

…if we regard the baby born as a fresh blackboard, on which any Skinnerite may sign his name.  He is a being born with many a propensity for evil or for good, inheritances maladaptive or overwhelmingly adaptive to present circumstance.  But we must first try to understand him.  That surely is the intellectual objective of developing evolutionary thought.

All this was written long before the appearance of Sociobiology, and yet today, even as thinly disguised versions of his hypotheses of the hunting transition from ape to man, human territoriality, ingroup-outgroup behavior, etc., turn up ever more frequently in the academic literature as “original work,” Ardrey is treated as a pariah.  After all, he was a “mere playwright,” and how much could such playwrights as Shakespeare, Ibsen, and Shaw, not to mention Ardrey, possibly know about human nature?  I am no disciple of Ardrey’s, nor do I consider him infallible.  Indeed, unlike so many others, he was quick to admit his own mistakes.  I do, however, feel a certain sense of unease when I see lies and half-truths tarted up as “history.”  I will therefore continue to insist that Ardrey was the most influential and effective opponent of the Blank Slate.  The historical source material demonstrating that truth is there in abundance.  Perhaps some day a historian of more than common integrity will collect it and write a history of the Blank Slate debacle the way it was, instead of the way academic apologists wish it had been. 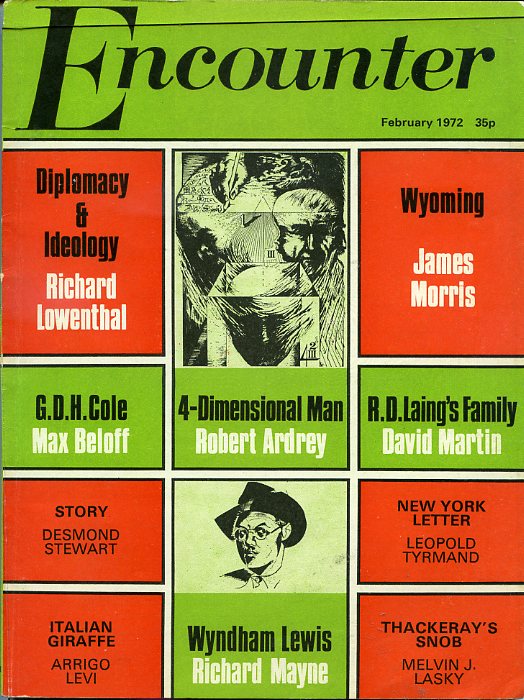 7 thoughts on “Historical Artifacts of the Blank Slate”