You can always tell when a political message is being delivered effectively.  Instead of debating the message, the ideologues on the other side smear the messenger.  That being the case, it’s obvious Glenn Beck has been hitting some nerves lately.

His latest detractor is Congressman Anthony Weiner of New York, who has been shedding crocodile tears because one of Beck’s sponsors, Goldline, Inc., is supposedly overcharging for its gold coins. It’s interesting when you follow the links on this story that you have a very hard time finding exactly which gold coins Weiner is referring to, regardless of whether the source is on the left or the right. It’s hard to avoid the conclusion that neither side has a clue what they’re talking about. The dead tree media sites often claim that Goldline’s markup is 90% over bullion value, but, as noted here, that number is meaningless unless you identify which coin you’re talking about. For example, one of the more recently struck U.S. gold coins, the $2.50 Indian head quarter eagle, only contains 0.121 troy ounces of gold, or a little over a tenth of an ounce. Based on the current gold price of $1190 per ounce, its bullion value is, therefore, about $144. However, look at the completed listings for the coin on eBay and you’ll see that high grade coins easily fetch over $300 at the moment, and even coins with significant wear typically sell for over $225.

If one is speaking of strictly bullion coins, it appears that Goldline’s markup over the most competitive dealers is around 25%, varying up to 35% for proof coins, which do have limited numismatic value.  However, that’s hardly out of the ordinary in the coin business.  Shop around on any of the coin cable channels on TV, and you’re unlikely to find markups less than that on similar bullion coins.  That seems rather odd when we learn that Weiner represents himself as perfectly balanced.  Why, to hear him tell it, he would go after liberals like a bulldog if they did the same thing.  For example, from Politico,

But Weiner, a liberal who represents New York City, brushed off allegations that his report was politically motivated. “My message is directed at consumers, telling them to beware that the things that Goldline and Glenn Beck are selling are essentially rip-offs,” he said, adding “if these were all liberal commentators who were promoting a company that has a 200-percent mark-up on its gold, I would like to think that I would be just as hard on them.”

If that’s really true, and we can take the good Congressman at his word, I have a prime candidate for his next investigation; the staunchly liberal Washington Post.  It happens that on page A-17 of today’s issue there’s a quarter page ad for silver dollars by GovMint.com, which refers to itself as “Your one best source for coins worldwide.”   It appears they’re selling Peace silver dollars for the bargain price of $39.95 each.  Now Peace silver dollars contain 0.773 troy ounces of silver, so the bullion value of each coin based on today’s silver price of $17.75 per ounce is only $13.75!  In case you’re bad at math, Congressman Weiner, that’s a markup of not just a paltry 90%, but a whopping 190% plus!  Unleash the hounds!

The WaPo has been running similar ads for years, so one can only wonder at the fact that the “fair and balanced” Congressman hasn’t yet sniffed them out.  Of course, the coins in question are claimed to be uncirculated, and even common Peace dollars have some numismatic value in that condition, so let us be more charitable than the good Congressman, and actually take that into account.  Let us take into account, as well, the fact that, if one buys twenty of the coins, one can get them for the bargain basement price of only $29.50 each.  Turning once again to eBay, we find that, as I write these lines, one can buy a dumptruck full of uncirculated Peace silver dollars for under $20 each.  Putting it all together, we arrive at a markup of a “mere” 50%.     Goldline, with its paltry 25% to 35% for similar material, is a mere piker by comparison.  So much for Congressman Weiner’s “evenhandedness.”

I doubt that Glenn Beck would agree with much of anything I’ve posted on this blog, but I’m glad he’s out there.  Don’t his liberal enemies always tell us that diversity is a good thing?  Well, he represents real diversity.  There’s no such thing as freedom of speech if it’s only the freedom to listen to people who think just like you. 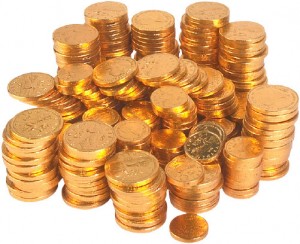