“Layers of editors” didn’t seem to help the traditional media much in their reporting about the recent North Korean nuke test. The bloggers beat them hands down in both accuracy and depth about the story. No wonder they’re losing audience. Take, for example, reporting on the yield of the weapon. In the US, CNN and MSNBC were typical of MSM outlets that seized on the early Russian estimates that the yield of the device was 10 to 20 kilotons. European outlets such as the Guardian followed suit. Radio reports typically compared the weapon to the one dropped on Nagasaki. Bloggers reporting on the test at nearly the same time were much more cautious – and accurate. See, for example, ArmsControlWonk and the FAS’ Security Blog. In spite of the dubious information floating around, a lot of people seem to be cocksure they know just what to do about the situation. As usual, the surefire nostrums vary considerably depending on whether one occupies a place on the left, middle, or right of the political spectrum.

The situation is very complex, and there are serious objections to all the simplistic solutions that their proponents seldom take into account. In fact, there may be no elegant solution to the problem. The Japanese grossly miscalculated the response of the United States to Pearl Harbor, expecting us to tire of an expensive naval war after a couple of years and let them have their way in Asia, after the fashion of the Russians in 1904-5. However, even the Japanese war party of the 20’s and 30’s was positively sober in its estimate of the world situation compared to the leadership of North Korea. We are dealing with a volatile, irrational enemy, and there are no perfect solutions to this problem. One thing is certain. When the inevitable happens, and a nuclear attack occurs, many attitudes will be adjusted. Nuclear weapons have not been used in anger for more than 60 years. They will, however, certainly be used again. The only question is when, and how. The time is probably nearer than we think, because all that’s needed is for someone or some entity, whether a terrorist organization or a nation state, to 1) be willing to pull the nuclear trigger, and 2) to acquire sufficient Special Nuclear Material (plutonium or enriched uranium) to build a bomb. And, make no mistake about it, once they have the SNM, they will have the bomb. 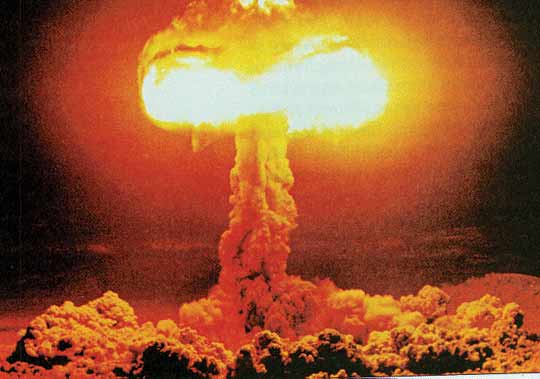