No doubt if you’ve been following this story you’ve noticed the howls coming from the usual quarters.  Take it with a grain of salt.  There’s no reason for Ranger School to be “dumbed down” for women to pass if the mission is anything like it was when I went through.  Upper body strength isn’t critical for Ranger type missions, and that includes rock/mountain climbing, rappelling, etc.  The premium is on being able to pack a serious load under adverse conditions of sleep and food deprivation, tolerate extremes of heat and cold, and “function” when you’re assigned to lead small unit operations.  A strong woman can do all those things.  There are ranger units, but the ranger and airborne badges are also marks of prestige.  Women should have the right to wear them if they can handle the physical and mental challenges.

When I went through, they found out I was a good swimmer, so I was appointed “far shore lifeguard” of my ranger training unit.  That meant I had to strip and carry a rope across streams when we came to them and make a rope bridge so the others could shinny across without getting wet.  I suppose I would have left my jockey shorts on if women were around.  Once the ranger sergeants just had me stand in freezing water up to my neck and pull the short guys across a deep spot by the webbing on their helmets.  When I finally got out I couldn’t straighten out from hypothermia.  We still had to wade through 600 yards of cypress swamp, but I was very fortunate to find a big fire when we finally got through that.  It’s probably the closest I’ve ever come to dying, and years later four guys did die of hypothermia.  They’re probably more careful now.  The next day it was so cold (in Florida!) that my sodden fatigues started freezing on my body.  Fortunately we all had two pair, so I stripped them off, buried them, and put on my dry ones.  No doubt they’re still down there rotting away somewhere.

We got one C ration a day (we’re talking about the ancient times before MREs), and were starving at the end of the swamp phase.  The first signs were dizziness when you went from a prone position to standing up.  Some of the guys started hallucinating at the end.  My ranger buddy seriously believed he was standing in line at Mama Leoni’s Restaurant in New York City at one point.  I got kind of worried about him.

Occasionally Huey helicopters would pick us up to take us from one mission to another, with “aggressors” usually waiting for us when we reached our landing zones.  We would sit on either side with our legs dangling over the edge holding onto a little strap “seat belt.”  Those chopper pilots were crazy, and I could swear my feet brushed against the top of the forest foliage one time.  By that time I was so dazed it didn’t bother me.

In those days we parachuted in to Eglin for the swamp phase from a combat training altitude of 800 feet.  Actual combat jumps were from 500 feet.  After my stick landed I looked up and saw the next one jump.  One guy’s chute was nothing but a ball of silk.  His reserve caught him a fraction of a second before he would have hit the ground.  When a later class jumped in a guy died when he landed on an old concrete airstrip and fell backwards, driving the rim of his steel helmet into his neck.  There were a few “laig” (leg, non-airborne infantry) rangers around, but they were rare.

I didn’t notice any powder rooms when we were on the march. 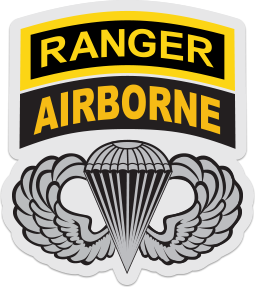