According to the Hunting Hypothesis, the evolutionary transition from ape to man, including the emergence of the physical, mental, and behavioral traits that characterize our species, was driven by the adoption of hunting as a significant food source.  Whether it is true or not is a matter of great interest in its own right, but perhaps of even greater interest and significance has been the intellectual reaction to the idea.  For several decades after it was first proposed, the hypothesis contradicted the ideology embraced by many intellectuals, including the community of experts in the behavioral sciences.  This ideology, amounting to a secular religion, required the perfectibility of mankind so that he could play his assigned role in the utopias the zealots of the new religion were concocting for him.  For this to happen, it was essential that human behavior be subject to complete control and manipulation by environment and learning, as noted by Steven Pinker in “The Blank Slate.”

The existence of innate human behavioral traits contradicted this essential dogma of the faith, and became anathema.  Any suggestion that such traits existed was resisted with all the spite and venom that the zealots of earlier religions reserved for their own heresies.  The result was a spectacular collapse of the behavioral sciences stretching over a period of many decades.  An entire community of experts managed to bamboozle itself into believing behaviorist dogmas that any teenager with a modicum of common sense could have told them were ridiculous after observing her own behavior in a crowd for a few hours.  It demonstrated that scientific progress is anything but inevitable in these supposedly enlightened times, and that ideological certitudes are as capable of trumping rational thought as they were in the heyday of the holy inquisition.

As for the Hunting Hypothesis, an interesting explanation of human evolution that was very plausible given our history and our easily observable behavioral characteristics, it was stillborn, although it has experienced a resurrection of sorts in recent years.  Arch-heresy that it was, any rational examination of it according to the scientific method was out of the question.  Its proponents were vilified, their work bowdlerized, and eventually many of them became scientific unpersons, their names no longer mentioned in the halls of the elect.  Perhaps the first to come up with a coherent theory of the hunting transition was Carveth Read, a professor of logic and the mind at the University College London.  His Wikipedia entry amounts to just two brief sentences.  Experts in human behavior would have done well to pay more attention to him.  Today they are “discovering” things he wrote about more than 90 years ago in a little book entitled, “The Origin of Man and of His Superstitions.”

Read made an unhappy choice for the name of his hunting ape; Lycopithecus, or “wolf ape.”   It enabled his detractors to evoke strawman images of werewolves and violently aggressive, bloodthirsty beasts right out of Tennyson’s “Nature, red in tooth and claw.”  What Read actually meant by his choice of names is entirely different.  As he put it,

Moreover, when our ape first pursued game, especially big game (not being by ancient adaptation in structure and instinct a carnivore), he may have been, and probably was, incapable of killing enough prey single-handed; and, if so, he will have profited by becoming both social and cooperative as a hunter, like the wolves and dogs – in short, a sort of wolf-ape (Lycopithecus).

In other words, the name was suggested, not by the viciousness or aggressiveness of wolves, but by their cooperative behavior.  Read went on to suggest that mankind’s erect gait evolved after, or concurrently with the increasing importance of meat in our diet:

…the less our ancestor in his new career trusted to trees the better for him. Such simple strategy (hunting from trees) could not make him a dominant animal throughout the world; nothing could do this but the gradual attainment of erect gait adapted to running down his prey.

What had seemed obvious to Read was quickly dismissed and forgotten, until, in recent years, it was “discovered,” in the guise of persistence hunting, suggested as the hunting strategy of Homo erectus.  Read the article and you’ll notice that, according to the current paradigm, a hunting lifestyle “suddenly” burst on the scene with the emergence of Homo erectus, a species that appeared on the scene about 1.8 million years ago, but that the earlier Australopithecines were still “scavengers.”  It’s amusing, really.  The proponents of the bankrupt “scavenger” theories still can’t bring themselves to admit that Raymond Dart was right about his early research into cave taphonomy, and Australopithecines were hunters too.  Somewhere a chimpanzee must be smiling smugly as he munches on a piece of colobus monkey.  Read had no such delusions.  As he puts it,

In course of time they brought cudgels and stones to the encounter (little did he realize that chimpanzees do just that), and after many ages began to alter such means of offence into weapons that might be called artifacts.

Remarkably, it seems that Read was somehow aware that chimpanzees occasionally eat meat, although the “experts” assured us through the middle decades of the 20th century that they were vegetarian.  In his words,

We must remember that, on the one hand, the chimpanzee is not exclusively frugivorous, and that, on the other hand, it is not likely that Man has been at any time exclusively carnivorous… Primates are known to seize and devour birds, lizards and even small mammals when chance offers an easy opportunity.

One wonders when and how this “knowledge of the ancients” about the eating habits of our nearest ape relatives was lost.  Read’s book includes interesting speculation on how the transition might originally have occurred:

It is generally admitted that our ancestor was a large anthropoid – possibly more gregarious than others, possibly more apt to live upon the ground; but neither of these suppositions is requisite. He was adapted to his life, as the chimpanzee and gorilla are to theirs: in which, probably, they have gone on with little change for ages. But into his life a disturbing factor entered – the impulse to attack, hunt and eat animals, which extensively replaced his former peaceable, frugivorous habit. The cause of this change may have been a failure in the supply of his usual diet, or an “accidental variation” of appetite. Not a great number need have shared in the hunting impulse; it is enough that a few should have felt it, or even one… Is it not likely to have occurred often, and with many failures? Similarly, of the resulting changes: the differentiation of our hands and feet is only an advance upon what you see in the gorilla; as for our ground-life, can the adult male gorilla be fairly called arboreal? Several primates use unwrought weapons; most of them lead a gregarious life, to which our own is a return; they are cooperative at least in defence; like many other animals, they communicate by gestures and inarticulate vocal cries. Cooperative hunting, indeed seems to be new in our order; but since wolves and dogs, or their ancestors, fell in with it some time or other, why should it be beyond the capacity of apes?

Apparently primates’ use of unwrought weapons was another bit of “ancient knowledge” that was somehow lost in the decades after Read published his book.  How much more plausible does his hypothesis now seem with what we have learned (or, perhaps, “rediscovered”) about cooperative hunting and the use of weapons in chimpanzees?

Read did not share the collective delusion of the blank slate, already in full career in his day;

That hunting came first is a true intuition: and, to understand the development of human nature, we need only refer the hunting-life back to the very origin of the human stock… So I point our (a) that man, in character, is more like a wolf or dog than he is like any other animal; and (b) that for the forming of a pack there was a clear ground in the advantage to be obtained by cooperative hunting.

To civilisation we are, for the most part, merely accommodated by experience, education, tradition and social pressure. A few people seem to be adapted to civilized life from their birth, and others to the slavish life; but all inherit, more or less manifestly, the nature of the hunter and warrior. This is a necessary basis of general and social psychology.

According to the high priests of the blank slate, wolves could no more have had a “character” than man.  For recent research that not only they, but many other animals have a “character,” including traits analogous to moral behavior in human beings, see, for example, “Wild Justice; the Moral Lives of Animals,” by Marc Bekoff and Jessica Pierce.

Far from entertaining the crude, “nature red in tooth and claw” ideas attributed to him, Read suggested that the transition to the hunting lifestyle was responsible for many of the traits we associate with moral behavior;

We are left to speculate about the earliest growth of magnanimity, friendliness, compassion, general benevolence and other virtues… Several further considerations may be offered to account for the growth of what we call humanity… Friendliness and the disposition to mutual aid are so useful to a hunting-pack that is not merely seasonal but permanent (as I take ours to have been), both to individuals and to the pack as a whole,… that we may suppose natural selection to have favored the growth of effective sympathy… But since in individuals our complex nature varies in all directions, and amongst the rest in the direction of benevolence; and since any organ or quality that varies is apt to continue to do so, and may go on varying even beyond the limits of biological utility; why in human life may not this happen with benevolence?

In retrospect, Read’s hypotheses about Lycopithecus seem a great deal more plausible than the infantile dogmas of the behaviorists.  It is interesting to note that, writing as a logician, he also had some surprisingly modern ideas about what we now call “confirmation bias”:

Every desire fixes attention upon beliefs favorable to it, and upon any evidence favorable to them, and diverts attention from conflicting beliefs and considerations. Thus every desire readily forms about itself a relatively isolated mass of beliefs, which resists comparison and, therefore…, does not recognize the principle of contradiction.

Such were the thoughts of a man now forgotten, who wrote just before the lights finally flickered out and died in the behavioral sciences.  His career and ideas are a cautionary tale to anyone who believes in the inevitability of scientific progress.  Meanwhile, the dogmatists haven’t gone anywhere.  They’ve merely been forced out of one of their favorite redoubts.  Their busy redefining reality even as we speak.  It may no longer be anathema to speak of innate human behavior, but, according to the new paradigm now emerging, our behavioral traits can still be manipulated to create a world of universal goodness, in accordance with the most up-to-date definitions of “good,” ushering in a future of “human flourishing.”  Anyone who objects that this rosy vision might not be entirely plausible in view of what we know about the innate in human behavior is dismissed as a “reductionist,” a pejorative term that has been introduced to replace its cruder precursors such as “racist” or “fascist.”  Those who don’t necessarily fancy “flourishing” as defined by today’s crop of leftist ideologues would do well to remember Carveth Read.  Secular religions can be quite as effective as their more traditional cousins at suppressing the truth.  They did it in the recent past, and they can easily do it again. 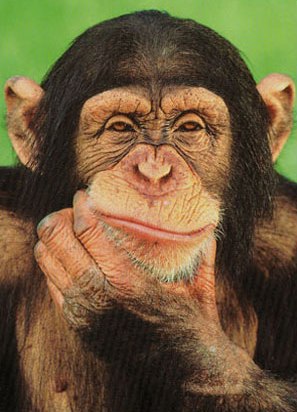 2 thoughts on “Lycopithecus and Carveth Read: The Genesis of the Hunting Hypothesis”