Given the havoc it has caused in the last hundred years, it seems relatively little is known about the history of the influenza virus before 1900.  In a quick Google search, I found a few blogs that mention historical pandemics here, here and here, and a book with some additional information here, but details are few in far between.  In browsing through an old British Quarterly Review (the issue of December, 1848), I found the following in the memoirs of the Austrian diplomat, Baron Wessenberg.  The Baron is now largely forgotten, but had an interesting career.  Captured by French partisans in 1814, he was brought before Napoleon, and undertook a mission that was probably the last undertaken by a foreign diplomat on behalf of the emperor.  He later served as Metternich’s deputy at the Congress of Vienna.  It happens that he was also resident in Paris in 1802 when it was swept by a disease he referred to as, “La Grippe,” translated by the Review as, “the Influenza:”

“All Paris was devoted to pleasures and amusements; these were not even put to flight by a horrible influenza, which was accompanied by a malignant ophthalmia, and which during several months made frightful havoc.  More than thirty thousand people fell victims to it.  This illness, and especially the ophthalmia, its dangerous adjunct, had been imported from Egypt by the troops that returned after the assassination of General Kleber.  At Paris it assumed at once an epidemic character, aided no doubt by the extreme humidity which prevailed throughout the winter.  For my own part I did not escape.  However, I had the good fortune to recover without the help of a physician, by merely following a regimen pointed out in the Journal des Debats, and which consisted in frequently applying to the eye afflicted some tendons of raw veal, and in avoiding all substantial food during the whole course of the illness.”

The Quarterly Review article includes a number of other interesting anecdotes from the Baron’s memoirs.  I recommend the great Tory review to modern readers, by the way.  Among other things, today’s “Christian nation” fundamentalists will discover in reading it who their real intellectual antecedents were.  (Hint, it wasn’t Jefferson, Madison, or Franklin). 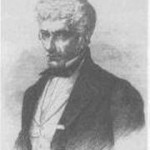